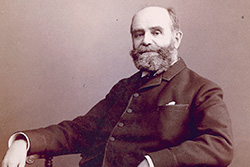 Named in honor of Chicago civic leader Eliphalet W. Blatchford (1826-1914), the Blatchford Society was established by the Board of Trustees to recognize and honor those who have pledged to support the Newberry Library through their estates. The foresight of these individuals is vital to ensuring the Newberry upholds and builds upon its reputation as a trusted source of information in the humanities, providing the highest standards of service to those who come seeking knowledge.

Throughout its history, the Newberry Library has been the recipient of many planned gifts. In fact, it was a bequest from Walter L. Newberry, for whom the library is named, that provided for the establishment of the library.

Mr. Blatchford served the Newberry Library for more than 37 years as co-executor and trustee of Walter L. Newberry’s will, and as the first President of the Board of Trustees. He was deeply committed to ensuring that Mr. Newberry’s will and his wishes for the library were carried out. Blatchford himself remembered the library in his estate plans and also left his papers to the Newberry Library collections.

Today, our Blatchford Society members are building their own legacy at the Newberry Library. Their generosity ensures the library’s collections, integrity, and ability to serve the community continue to grow, now and in the future.

The support of generous donors has helped the Newberry Library collect, preserve, and make accessible its world-renowned collection. Some have provided the library with valuable books, manuscripts, maps, and other materials, while many others have provided the financial resources crucial to maintaining the library’s leadership in the humanities and its commitment to the community.

Membership in the Blatchford Society is open to all who have made an estate or deferred gift commitment of any amount or value to the Newberry Library. Donors may make a gift through a bequest in their will, or by naming the Newberry Library as a beneficiary of life insurance, charitable gift annuity, lead trust, or charitable remainder trust. We look forward to recognizing your generosity -- by name or anonymously

We are pleased to offer those who join the Blatchford Society the following benefits of membership in recognition of their foresight and commitment.

All members of the Blatchford Society receive:

Planning for the Future

Planned giving has played a vital role in the Newberry’s history and is vital to its continued growth. Those who provide for the library through their estate plans demonstrate not only their appreciation for its past, but also their belief in its future.

If you believe that you already qualify, or you would like to speak with someone regarding creating your own legacy at the Newberry Library through a planned gift, please contact:

The gift planning information presented on this Planned Giving website of Newberry Library is not offered as legal or tax advice.
Read full disclaimer|Site Map|Planned Giving Marketing Content © 2021 by PlannedGiving.com.

The material presented on this Planned Giving website is not offered as legal or tax advice.
Read full disclaimer|Planned Giving Content © 2021 PlannedGiving.com